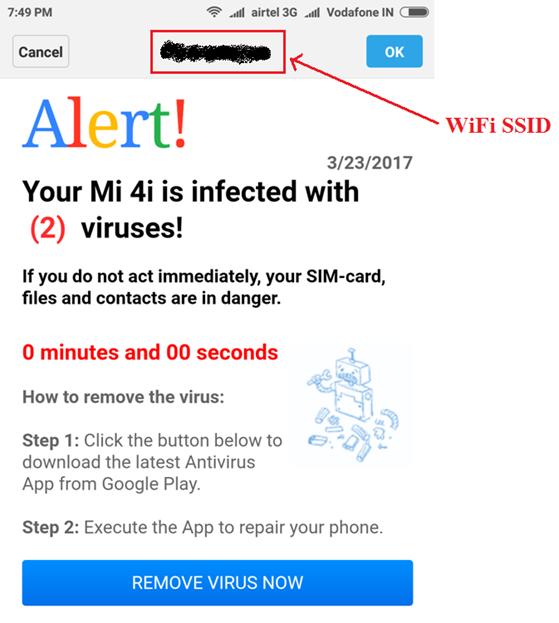 The picture above is self-explanatory. It is clearly a fake message, but it is more convincing since it displays the device make and the current WiFi SSID of the victim, and even uses Google colours and identifiers.

This scareware message attempts to coerce the user to “download the latest Antivirus App”. It is likely from the message “0 minutes and 00 seconds” that upon clicking on the link “REMOVE VIRUS NOW”  user will be redirected to download some dangerous app either from a third party market or even from Google Play Store. The download was never attempted but the app may well have been a deceptor which would claim to have discovered all manner of issues with the device, the fixing of which would require payment.

This fake message may well be generated from the Mi4i device itself (place of manufacture also plays a role in the device’s integrity) or from the WiFi router to which the device was connected at the time.

These kinds of specially crafted user-specific messages exploit the user’s fear factor to force them to download the app recommended in the message, thus compromising their devices themselves.

To avoid any such unwanted circumstances we recommend the smartphone users to: