This is the second part of a three-part blog based on my paper for AVAR 2012 that discusses the security challenges involved in adopting two relatively new technologies, namely, Internet Protocol Version 6 and Internationalized Domain Names.

Continuing from the first part of my paper…

The Internet is witnessing a critical phase in the transition from an old technology to a new one, and users must understand the security implications involved. These implications could manifest themselves either during the implementation stage or after.

Tunnel Vision. IP tunnelling implementation involves encapsulating the IPv6 packets into IPv4, which is similar to creating a Virtual Private Network (VPN). Teredo, for example, is a tunnelling protocol that is installed by default on Windows Vista and Windows 7 operating systems, and provides IPv6 connectivity to a native IPv4 device [7].

Since the IPv6 contents are disguised inside the IPv4 packets, most security devices struggle to analyse and detect them. This in turn opens the door for attacks when these tunnels are used to transport malware.

There have been known instances of malware which enable IPv6 on a compromised host to communicate with its creator using these IP tunnels. The fact that IPv6 is enabled by default on most new operating systems makes it easier for malware to spread without being noticed. The infamous Zeus, for example, is known to support IPv6 from early 2010 onwards. This malware not only boasts of having the capability to sniff IPv6 traffic, but also supports an IPv6 Peer-to-Peer network [9].

Stack ’em Up. Dual Stack Implementation involves running both IPv4 and IPv6 in parallel, with one protocol taking preference over the other. Communication is done using the preferred protocol first, failing which it is retried using the secondary protocol.

Considering that communications happen natively either in IPv4 or in IPv6, and that both protocols co-exist in the network, until sufficient machines become IPv6 compliant, at which point IPv4 can be pensioned off, this is the preferred method of transition.

To NAT or Not. Network Address Translation (NAT) is a technique that allows multiple devices within an internal network to get online by sharing a single public IP address. This public IP address would be provided to a router at the gateway level, which in turn directs traffic to machines inside the network that use non-routable IP addresses.

On a small scale, NAT is used within a Small Office Home Office (SOHO) environment, and on a large scale, often referred to as Carrier Grade NAT (CGN), it is used by ISPs who have a limited number of IPv4 addresses. 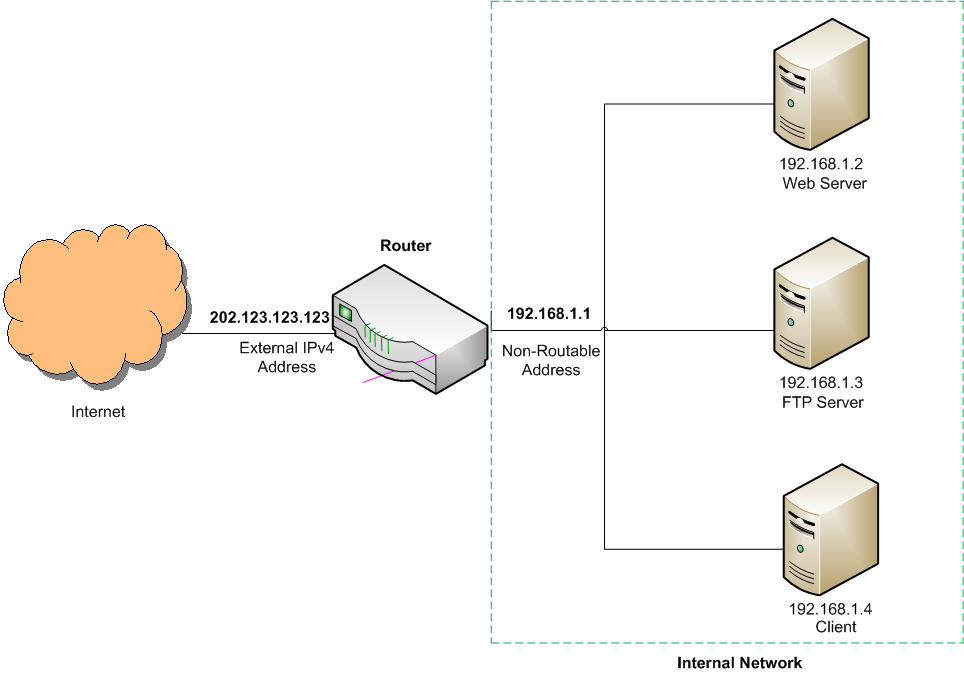 Fig.6: Simple implementation of NAT within a SOHO environment

Apart from cutting down on the number of routable IPv4 addresses used, this technology also provided a certain degree of privacy and security to the users in the internal network. Automated port scans and information gathering attempts are deterred at the gateway, and would only succeed from inside the private network.

The gargantuan number of addresses available in IPv6 means that ISPs could technically do away with NAT, and assign a static IP address to each of its users, and yet never run out of addresses in the foreseeable future.

While this would promote end to end connectivity, which was how the Internet was originally envisaged, it could also open up the flood gates of machines which were never previously directly connected to the Internet, for now they would be vulnerable to prying eyes and groping hands.

The silver lining, however, is that since an IPv6 address can now be mapped to each user, tracking down malicious traffic & the victims of a malware incident also becomes easier. It could be a boon or a bane, depending on how one perceives it.

The Whois Who of Malware URLs , Phishing & Spam

Over the years as communication media within the Internet expanded from e-mails to other forms such as instant messaging, forums, blogging, social networking, etc., spammers followed suit with campaigns targeting these channels. These campaigns include the relatively innocuous comment spam posted in blogs/forums, Pump ’n Dump scams, attempts to sell Viagra and the like, phishers vying for sensitive user information, and malware related spam which go for the jugular.

The current volume of spam received via various communication channels is kept to a minimum thanks to a combination of techniques which involves, but is not limited to, content based and list based filtering. Given the plethora of malware URLs and spam messages disseminated everyday, most of this filtering is done using automated systems.

Fig.7 below shows a steady rise in the number of malware/phishing URLs for the first half of the year 2012 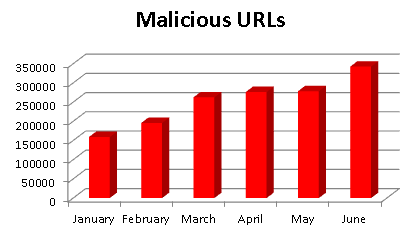 Content Based Filtering. This works on analyzing different characteristics of a message or a URL. For example, messages with keywords such as Viagra, Rolex, etc, somewhere in the MIME envelope could automatically be declared as spam. Similarly, a URL with words like PayPal or Facebook in the sub-domain component, combined with a recently registered domain name having a minimum validity can be deemed suspicious. However, when these keywords are represented in another language, automated content based filtering could become more challenging since we would now have to recognise the representation of a keyword in as many different character sets or Puny Code equivalents, as possible.

List Based Filtering. This aims to assign a reputation to the source of the e-mail message or the URL. For example, when a stream of messages detected as spam originates from a single IP address, that address may then be assigned a bad reputation, and would go into a blacklist. Similarly, a malicious domain or IP could go into this list.

Subsequent messages from a blacklisted IP address would automatically be labeled as spam & dropped when e-mail servers query the blacklist in real time. Likewise, URLs containing blacklisted domains or IP addresses would also be blocked as malicious.

Fig.8: One blacklisted IP address used to both send spam and host malware [10]

Once a domain/IP address gets blacklisted, the attacker shifts to a new address from which to send the spam or on which to host malware until that gets blacklisted too. They do this by either releasing and renewing their IP from their service provider, if the machine used to send the spam or host the malware is physically owned and controlled by them, or by selecting a new bot, a machine from their botnet consisting of many infected machines, from which to send the spam vicariously or to host malware on the attacker’s behalf.

On an IPv4 network the attacker has a theoretical maximum of only 4 billion addresses to cycle through. This number increases manifold within an IPv6 network. The increase in the number of domain names, due to the introduction of IDNs, is also likely to add to the blacklist woes, especially when these domains originate from an IPv6 network.

Fig.9 below shows the steady rise in the number of IDNs in the first half of the year 2012. Though currently small, the numbers are expected to increase significantly over time. 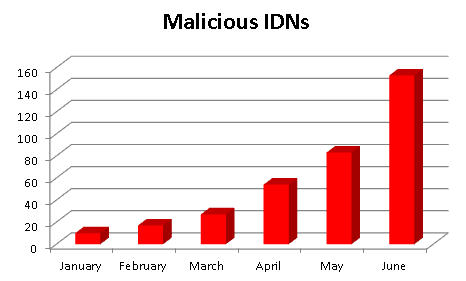 Another problem with respect to blacklists is the amount of disk space occupied by these lists and the time taken to look them up. Even in the case of the relatively impoverished IPv4, assuming that all 4 billion addresses get blacklisted, a flat CSV file containing all these addresses occupies a minimum of approximately 60 Gigabytes of disk space on a Unix platform [11]. Consider further the amount of time taken in creating, maintaining, and querying such a big database in real time. Such a system would be nigh on unworkable for IPv6.

Click here to read the third part of this blog.